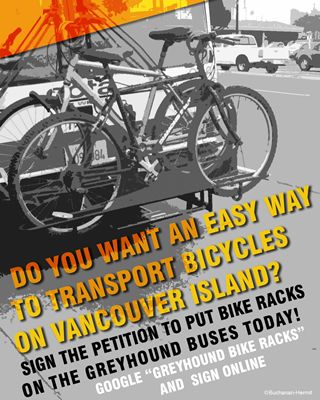 Ever since I became a full time cyclist I have been involved with cycling advocacy. For over a year now I have been promoting the cause of improving bicycle transportation infrastructure on the Greyhound buses on Vancouver Island. When I moved to Nanaimo in 2008 and still had the inclination to visit my previous home and friends in Victoria, I realized how difficult, inconvenient and expensive it was to transport myself and my bike 100km. I started a petition in the hopes of gathering names to show Greyhound that there are numerous people that would use their service more frequently if only the infrastructure for bike users was improved. So far conversation with Greyhound representatives has been met with the excuse that it is not possible to safely put bikes on bike racks on buses which travel at high speed, which is false because I know it is being done by GO Transit on their fleet of highway traveling buses in my former home of Toronto. After being questioned on this topic, the representative, Mr. Timothy Stokes, simply instructed cyclists to use the existing inadequate services, and that there are no plans to upgrade service in the future.

The petition is online and can be found HERE.

I would encourage you to contact Greyhound and Mr. Stokes if you wish to have your opinion known. 1-513-362-4600, tim.stokes@firstgroup.com